I miss Jeff Allen for many reasons. First and foremost, he was a friend. Second, for those who didn't know Jeff, he was a full time Trop Rock DJ, dedicated to moving the genre forward, only with the best foot being used for every step. 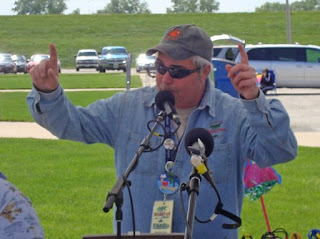 I first met Jeff in 2009. He was doing a DJ gig at a bar on the roof top of The Bull, named The Garden of Eden, during the MOTM festival in Key West. He was visiting from Pennsylvania.

I had arrived in Key West in 2008, and in 2009 I recorded a demo of my song “Raise My Glass To The Upper 48”. A few months later I made a collage picture video to go with it. I was able to use pictures I had to match the lyrics, the theme of which which was a story of living in Key West.

Jeff had seen it and approached me at The Garden of Eden. He said “I'm really interested in what you are doing! It's original! Get a great producer! Please don't waste your time with a second rate producer either.”

Gary Ek steered me in the direction of Dan Simpson, who did a first rate job plus on my album
“Shanghai'd and Marooned in Key West (things could be worse)”. Jeff loved the album, I'm very happy to say, and played it all the time on his station, Beachfront Radio.

Later, I was talking with Jeff and he was telling me that he would get loads of CDs in the mail every month, from people hoping for airplay.

“Most of them I reject. The quality of the production on most is just not the top quality I'm looking for. Trop Rock has to be putting it's best foot forward and if it's not top quality, I won't use it.”. As in my case, Jeff always urged new artists to go with a great producer. If the production wasn't up to par, it never made the Beachfront playlist.

We lost Jeff to cancer a few years ago, unfortunately.

Since Jeff's passing, we've seen a lot of new Trop Rock stations enter the arena. Some are sticking to Jeff's idea of only having top quality recordings. On the flip side, there are DJs out there that unfortunately must have ears of tin, as the some of the music they are airing are, on a good day, third or fourth rate. In some cases, that's being kind. In other words, the production quality of a lot of material we're hearing lately is complete crap.

As I mentioned, when I set out, I decided to go with local engineer/producer Dan Simpson. I was working at an art gallery at the time and told a new guy who had just transferred from a sister gallery down the street, about my project. When I told him Dan was going to produce the album, his reply was “I never heard of him. I'll produce you! I'm a great producer. My stuff sounds fantastic!”

Well, anyone who is in the music business in Key West knows Dan Simpson. Dan had been playing bass and recording all sorts of artists in Key West for over thirty years. Naturally, a red flag went up. The employee was transferred back to the other gallery a few days later. Several months after that I heard something that the employee produced. It may have been the worst thing I've ever heard. It was simply atrocious.

The point here being that there are a thousand charlatans out there who will try to convince those who just don't know the industry. Some may have all sorts of top line recording equipment. However, that doesn't mean squid. The idiot from the art gallery who wanted to produce me, actually thought he was really good. I could have done much better than he did, and I am no recording engineer by any stretch of the imagination. Terrifying.

Dan Simpson moved from Key West last year. He spent thirty-seven years here. I'll always be grateful for both his level of the work we did together, his professionalism, as well as his friendship. For myself, I'm a hands-on sort of artist. I can't just send a demo of a song to a producer and have them send me a finished product back. I'm the type that is there during the recording and making changes as we go. The reality of it is, I'm co-producing it from a standpoint of personnel, though certainly not the engineering side of it. So, Dan moving away, doesn't work.

In Key West, we're very fortunate to have Ian Shaw, an English producer who moved here several years ago. I've been friends with Ian for almost as long as he's been here. Ian has a long, very successful track record with over thirty years of success in Great Britain. He and I started working on my next album “Jump Into de FiYa!” last year. The recording and production is first rate, or above with Ian Shaw.

If you are a recording artist, a DJ, or station principal, I urge you to keep the standard at it's highest level, as Jeff did. Measure the quality of professional, commercially produced recordings by artists such as Jimmy Buffett, Kenny Chesney, Zach Brown, Mark Knopfler, The Dead, ABB, etc. Use that as your gauge! Granted, none of the Trop artists will have a budget to work with what will rival those artists, however, their finished product should be 80% of the quality, or more, of that of the big budget pros. If it's not, my suggestion is not to play it, unless you're doing a demo show*.

And for the artists, don't listen to the hype you might get. Listen to the producer's finished work of others before jumping into the fire. That's the real test.

Also, very important!!!! Listen to their previous work through various speakers and headphones. The ear bud headphones as well! Hearing work through the producer's speakers is only part of the equation. The average listener will never hear your music through recording monitors.

As DJs, go ahead, you are not only allowed to cherry pick, Jeff's spirit is encouraging you to do so.

Maintain the standard and keep the bar high!

On that another trip in 2016, we headed out of the Keys this time to Diablo Creek in Englewood, then on to at Vinny & Mo's Lobsteritaville, an hour south in Cape Coral. What a blast there as well!

So far this year we've done two. One in Cape Coral at Art and Darleen's Destination D'Arts, in Cape Coral and then up to J & L's Lai Low in Port Charlotte for anther fantastic time! 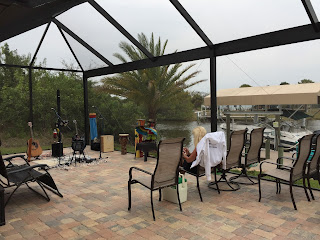 There are many great things about house concerts, one of which is that it's exactly what it says it is, a concert. It's a different animal than playing in a bar. In a bar, people have the opportunity to listen to what the artist is playing, or shoot the breeze with their friends. At a house concert people sit and listen to the music! Fantastic!

In some cases, the house concert venue will have a designated area for those who want to talk, which is far away from the concert, so not to interrupt the concert itself. Great idea!

One of the things we heard on our last trip, was that on the west coast of Florida, house concerts were springing up left and right, and left again. The events we played were about an hour apart. That works. What we've been told was that the market is getting saturated, however. Apparently two, sometimes three events are being held in the same area, at the same time.

In my opinion, house concerts should be special. If the people attending are going every week and deciding between acts the uniqueness of the events are lost.

* = Danny Lynn of Tiki Man Radio is thinking about be doing a demo show. Demos are recordings that are often used to sample a song. More often than not, a demo is a sample of a song. The recording is often minimal, sometimes just a guitar and a voice, others a bit more. Demos are almost never used as a final recording. The fun thing about Danny's show is that if the audience responds well, the artist may just record it professionally as a release! This could be a springboard for new songs!


Thank you for reading my blog!

If you'd like to support my efforts, please look into my music, as well as my book "Bar Stories"!

I thank you in advance!

Also, please check out my book “Bar Stories”. It's a fun book about various bar situations I've seen, witnessed, or participated in over the decades. If you're looking for a depressing book, you're in the wrong place!

This book is FUN! Additionally, purchasing this book also is helping me write the three other books I am currently working on: “The Absolute Best Bars in the Florida Keys”, “Living On A Tropical Island” (also known at this point as “Island Living”), and “Time Traveler”. Bar Stories is only: 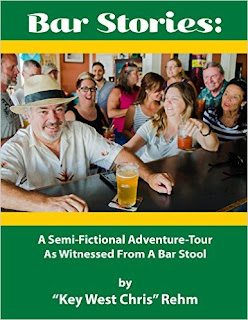 Posted by Chris Rehm at 2:16 PM No comments: