The Future of MOTM and Coastal Americana?

The second largest music festival in Key West, MOTM, has concluded. This year was the 27th festival that PHIP (Parrot Heads in Paradise) has hosted, albeit the first ones were held in New Orleans. I am not a member of PHIP, so I do not have access to anything not posted publicly by them. What I can say is that they do a tremendous amount of charity work benefiting the town of Key West, which is nothing short of outstanding! Thank you!

While PHIP's MOTM event is held every year at The Casa Marina, other musical events happen throughout the town because of it, albeit not connected. As I understand it, musicians at PHIP's event are supposedly on an exclusive contract to only play at the Casa Marina. However, for many it's “Don't ask, don't tell”, as you'll find many playing about town.

One of the hottest subjects being talked about this year is the overall growth of events outside The Casa Marina. Many attendees never register for The Casa because they never go there, but do attend the events about town. On the other hand, my girlfriend, Dani Hoy, has always registered, but in the last two years, failed to go to any of the PHIP events. That's pushing $200. However, for performers like us, The Shanty Hounds, there are too many events of relevance happening all around town to pass by, as we can be a part of them or catch the shows, not to mention ourselves having something like six, or seven gigs of our own. Dani is happy buying and not using her ticket as it goes to assist the charities PHIP supports. Playing music is what keeps a roof over our heads fifty-two weeks a year. There are plenty of other events about the town that spark our interest. Having stated that, I do appreciate what PHIP has done over the years. 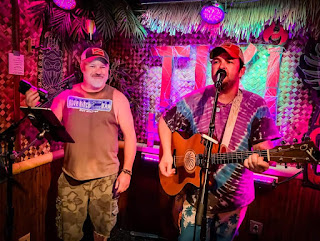 As I mentioned, the chatter among many attendees and musicians this year. was the size of the event outside The Casa Marina, how it has been growing, and where is going and growing, from a music perspective.

Tiki Man Radio's Songwriter's Showcase, running in only it's second year, drew 48 songwriters over three days! Repeat that:, they drew 48 songwriters! Additionally, the organizers, Danny Lynn, Brian Fields, Heather Moss O'Shields, and Michelle Tafoya ran it like clockwork. No doubt, one of the most professionally run events over the week. On top of that, they had fifteen more songwriters in reserves! If that's not a sign of growth, I don't know what is?

It should also be noted that a tremendous amount of planning went into this event. A complete year as a matter of fact. Brian and Michelle put together an appreciation bag of goodies for all who played, with items and coupons from vendors all around town! Danny and Heather broadcast the entire three-day event live on Tiki Man Radio https://www.tikimanradio.com/. Gary Ek from Key West local station 104.9 The X, helped out as well! Two radio stations working together! http://thexkeywest.com/ 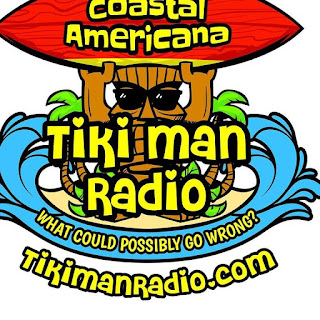 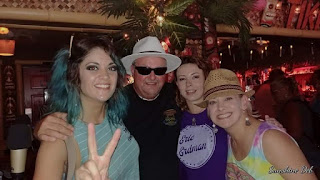 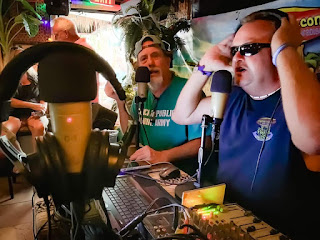 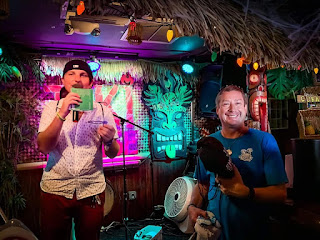 Another radio personality, Eric Babin, of Radio Trop Rock, after the evens concluded, put out the question on social media I'd heard so often during the week, suggesting that the events outside the Casa had grown and become more of an artist event unto itself. In answering his post, some suggested the PHIP event was becoming long in the tooth and seeing a drop in attendance. 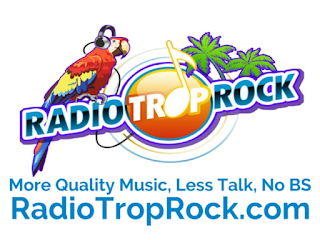 Here's what I can say: PHIP is a do-good organization focused on, as they say of themselves, “whose purpose is to assist in community and environmental concerns and provide a variety of social activities for people who are interested in the music of Jimmy Buffett and the tropical lifestyle he personifies.“ They do-gooders with a Jimmy Buffett focused event. Good people, good causes! Every five or six years Jimmy Buffett himself actually attends the PHIP event as well, though it's highly unpredictable when that will be and it's often a cloak and dagger affair, with the organizers being as tight-lipped as they can be.

Buffett will be 72 on Christmas Day, 2018. Many of his fans are in his generation. It goes without saying, regarding this year's PHIP/MOTM, a lot of people who attended the first of these events twenty-seven years ago, are not attending them now, for all the obvious reasons. One attendee told me that attendance was down quite significantly from last year, not forgetting that last year's event was held shortly after Hurricane Irma.

If attendance is in fact falling, I would guess that it's because a lot of folks in their late sixties and early seventies simply just can't make it anymore. The cold, hard truth of the matter is if PHIP continues to focus on the same people to attend, their attendance will continue to drop. The bottom line is a younger crowd has to be in the cards if there is a plan for a future. Having stated that, attendance around town appeared to be healthy.

I was talking with Mike Nash of The Southern Drawl Band at our MOTM gig at Conch Republic Seafood and we both agreed that the event outside the Casa is growing in leaps and bounds. We also touched on the subject of outside the Casa it has become less and less Jimmy Buffett and more and more about the artists performing their own material. This sits well with both of us, as neither Southern Drawl or The Shanty Hounds are cover, or tribute bands. Mike writes his own material, as does Dani Hoy, and myself. I've been a published songwriter in Nashville for eighteen years. Having a crowd that is interested in new, creative music taking the genre in new directions is a perfect fit for all of us. 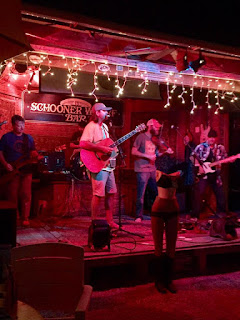 This is where the genre can take root and grow. Mike, Dani, and I also talked about the name we have, “Trop Rock”. We felt that it's too limiting. Apparently, we're not alone. If a Country artist or a Reggae artist look at it, how does the term “Rock” apply to their branding? It doesn't at all. What it does is go against the grain for them.

I mentioned to Mike that Danny Lynn had started using the name “Coastal Americana”, for his station Tiki Man Radio, which we both liked a lot. Mike had mentioned that he'd recently been talking to other artists about a name/label for the genre and although they all felt the same about Trop Rock being too limiting, they hadn't had an idea for a new one. As it turned out, Mike liked “Coastal Americana” a lot, and would mention it to them. We'll see what happens as time goes on. On a fun note, Loren Davidson came up with the name several years back. Personally, I think it's fabulous!

However, the genre needs new, younger fans if it is to survive. We seem to have a healthy supply of new artists, but not so much new fans. Two years ago I had put out a call for this to everyone in the media, both radio, and print. The idea was received unanimously enthusiastically by all!

As time and discussions went on, it diffused. I recall talking with one person regarding new ideas and she just kept saying “But that's not how it's been!”.

She was right. There were a bunch of new ideas on the table and it was not how things had been. What had been was in the past. On the other hand, things continue to evolve and they will never be the same, which is true with everything. I felt bad for her as we've all been in situations where we didn't want to accept change. Everything moves on however and the time for Coastal Americana to take root is at hand, there's no doubt about that.

The talk on the street goes so far as suggesting that the event run throughout town, much the same as The Key West Songwriter's Festival (KWSF) has done for the last 23 years. In the KWSF's case there is no central nucleus, so to speak, at least not in the sense as The Casa is for MOTM. Also, lets not forget that the outside events are not connected with the PHIP event at The Casa at all. While Smokin' Tuna for the is the home base for the KWSF, the events run all around town, including Smokin' Tuna. As a matter of fact, there could be six or eight events running at the same time as events at Smokin' Tuna and all are part of the event. 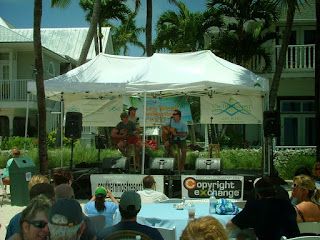 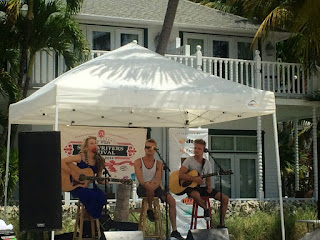 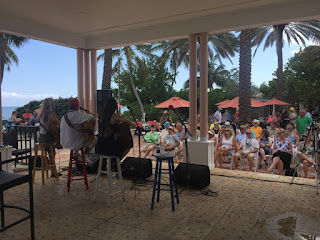 For those unfamiliar: After Fantasy Fest, The Key West Songwriter's Fest (KWSF) is the largest event in Key West's annual calendar and also the largest songwriter event in the world. The last time I checked there had been 230+ songwriters in the event itself, not to mention the independents who are not in the festival, but come with hopes of playing an independent gig. I believe it draws in something like 60,000 visitors to Key West. It is put on by BMI Nashville and draws songwriters from Nashville, Austin, New York, Los Angeles, everywhere in between, as well as all around the globe. Songwriters are featured in bars, restaurants, theaters, as well as hotels Additionally, they are almost always in an In-The-Round situation.

I consider myself very, very fortunate to be both published in Nashville since 2000 with McClure and Trowbridge Publishing Nashville and one of the very few local songwriters to be in the festival, no less than seven times. It's the greatest honor I've been bestowed on as a songwriter.

Again, the observation by virtually everyone says that the events around town today are about the songwriters and their music. It's becoming its own entity. In the words of Young Frankenstein, “It's Alive!!!” This has been the case for several years running and it's finally taking hold. “The Coastal Americana Music Festival”....Time, organization, and marketing will tell. And don't get me wrong, the TRMA (Trop Rock Music Association) and Mark Friedman can be instrumental in this.

We'll see what happens to PHIP. They do have an event scheduled for 2019. At this time PHIP/MOTM is a registered event with the City of Key West. Key West has many events scheduled throughout the year, such as Fantasy Fest, The Hemingway Festival, various art festivals, so on and so forth. Should PHIP/MOTM cease to function at one point or another down the line, an event would require a new, organized appeal to the city in order to continue with the events outside The Casa Marina, in a fashion similar to The Key West Songwriter Festival, which can be used as a successful template.

However, the only way it will continue is to attract new fans. Without new, younger fans, the writing is on the wall. "Coastal Americana" is a great start.

Thank you for reading my blog!

Please check out my book "Time Traveler - The Oddities and Adventures of a Key West Bartender". Follow Mark Straight's continuing journies and friendships from current Key West, back to historical Key West and elsewhere! 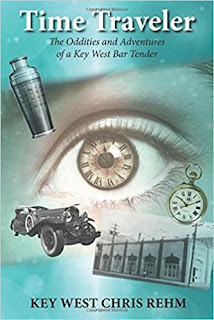 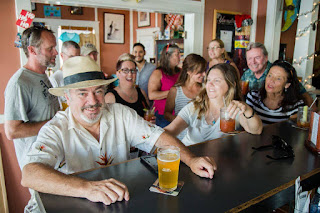 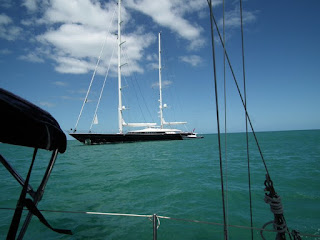 Enjoy the sound of the Keys!